The $3.6 million state-of-the-art paediatric rehabilitation facility at the McKellar Centre was officially opened on 22 April, 2022.

In 2016, the team from McKellar Kids’ Rehab approached local community fundraising group Our Women Our Children Volunteers with a project designed to support local kids recovering from injury or learning to live with a disability. This initial idea of a therapy garden developed into a much bigger project, with thanks to naming rights partner, Bendigo Bank joining with Our Women Our Children Volunteers, and more than 2000 donors who collectively have made the dream for a new home for the McKellar Kids’ Rehab service a reality. 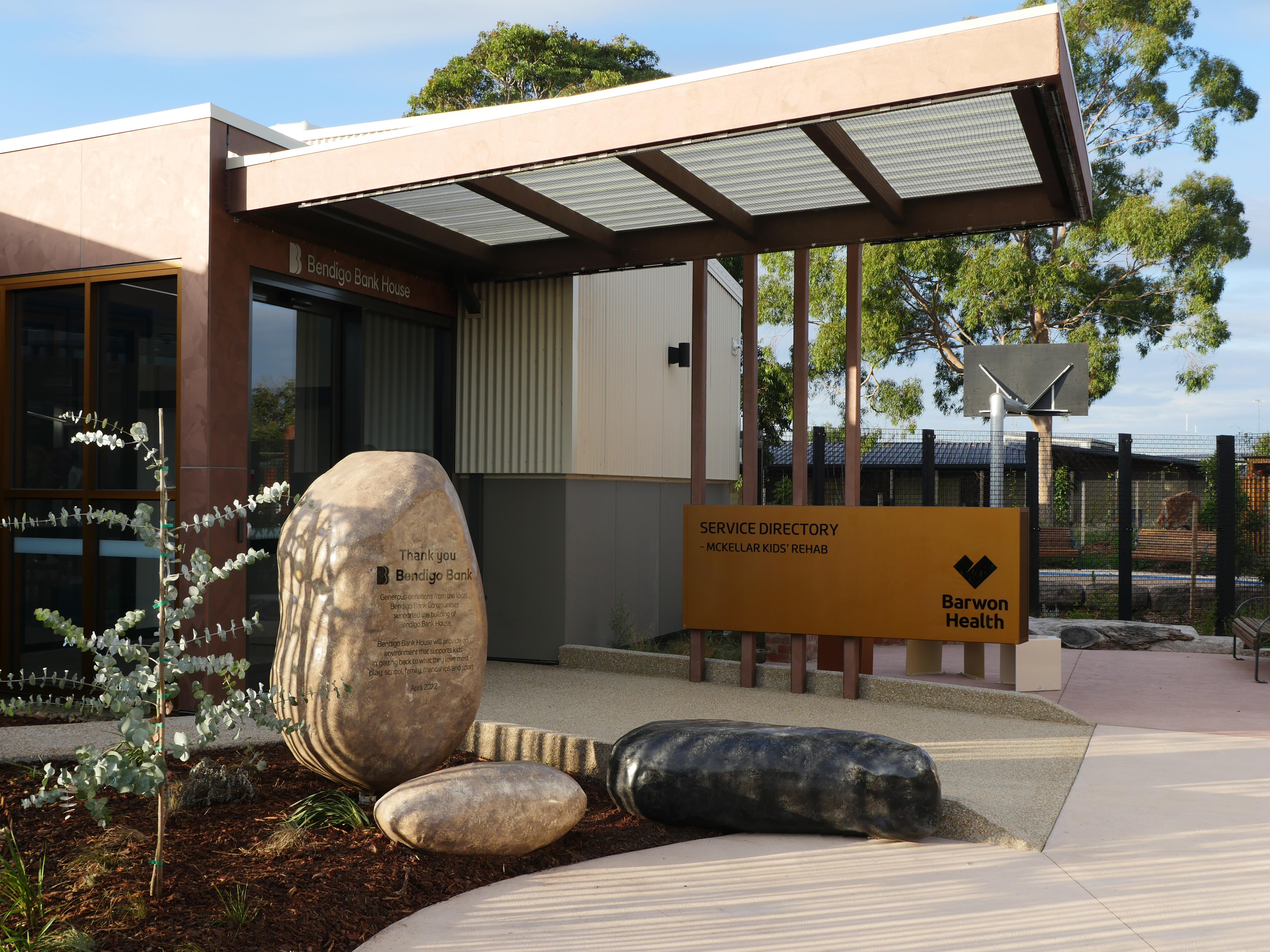 The McKellar Kids’ rehab team, now located in the new Bendigo Bank House, provide State Government funded specialist rehabilitation services for young people aged 0-25 who have sustained a traumatic brain injury, spinal injury, stroke or who require treatment after cancer or for other conditions such as cerebral palsy.

McKellar Kids’ Rehab co-ordinator Therese Clark said the opening of Bendigo Bank House was a culmination of five years of community support, both in fundraising for the build and working with young patients and their families to design the space.

“To make sure that this new centre was just right for kids, our team spent time asking young people what they wanted,” Therese said.

“Children and young people are not “little adults” so it was important to really understand what they thought this centre needed.

“What we’ve ended up with is a light-filled, welcoming space that is child-friendly and sparks their creativity and imagination and we are so proud of the end result.”

One family that has been there from the beginning is Braxton and his grandmother Sandra McLaglen, who are excited to see Bendigo Bank House come to life.

“Braxton has been a client for five-and-a-half years and both Braxton and I have been involved in the fundraising and consumer consultation since the beginning,” Sandra said.

“It is really exciting walking into the building to see the space come to life, after passionately supporting the Kids Appeal and the co-design process for many years.

“Attending therapy sessions in the adult gym was at times stressful because it was shared with adults of all ages. Now when we walk into the new centre there is no stress, as I know Braxton can just be his boisterous, happy self during his therapy without worrying about disturbing others.

“We’re continually thankful for the support of Braxton’s therapy team and we’re glad he can continue his journey in this new facility.”

Barwon Health Foundation board chair Dan Simmonds thanked the community and major donors for their support in making this dream a reality.

“Once again, the generosity of Greater Geelong has shone through. The Barwon Health Foundation is grateful to every single person who made a donation, purchased an auction item, attended an event, or put a coin in a tin in support of the Kids Appeal since it began in 2017 – this wouldn’t have been possible without collective community support,” Dan said.

“We are also very appreciative of all the Kids Appeal major partners who shared our belief that Geelong children deserve the very best; Bendigo Bank, Our Women Our Children Volunteers, Cotton On Foundation and The Gwyneth Raymond Trust. We are so proud that local kids now have Bendigo Bank House; a fitting home for the State Government funded McKellar Kids’ Rehab service.”

Bendigo Bank Geelong regional manager David Tudor said they were honoured to have helped bring this important facility to life for the Greater Geelong region.

“Our overall aim is to help communities thrive and Bendigo Bank House is a place that will help local kids, who have had a challenging start to life, reach their full potential,” he said.

“It’s been a very rewarding project to be involved in and we’re thrilled to see the doors open to those who need it.”